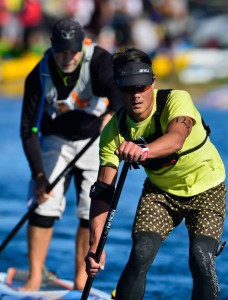 This year marked the 6th annual running of the event and the largest field to date.

A mere 6 years ago, a field of less than 35 paddlers took to the water between Paynesville and Lakes Entrance for the inaugural race.

It was then a friend of Warwick Lee who happened to be living in Lake Tyers casually mentioned that there was a fun paddle race taking place in Victoria’s most beautiful waterway.

That next year in 2012, Warwick assembled a field of 13 SUP competitors and hit Lakes Entrance for a weekend of paddling and fun!

Fast Forward to 2016 and this year’s edition saw a massive fleet of 150 competitors assembled, with almost 50 Sups making a huge impact on the event! 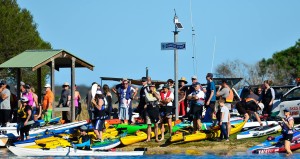 This year the event saw the 2 usual distances, with the Paynesville starters [27kms] taking a different route and heading north around Raymond Island into Lake King. The Metung leg remained the identical 13km [scenic] to previous years. The atmosphere at the Paynesville start was surprisingly relaxed as paddlers prepared body, mind and board. The sensational Autumn sunshine of Victoria’s “Riverina” certainly had the desired calming effect. Meanwhile, the carpark at Shaving Point, Metung was filling at an alarming rate as almost 100 paddlers went about their pre-race preparations. 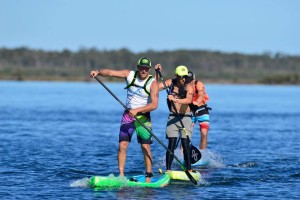 With the light northerly abating to dead calm conditions, it meant a long, hot grind for the Paynesville paddlers as the flurry of boards and paddles became a blur at the start. The aim of forming a pack and wash-riding is at the fore in every paddler’s mind, as paddling for 27kms [ or 3 – 4 hrs ] solo is not what most people call fun.

Various packs formed as the fleet headed out of MacMillan Straight into Lake King.

The Paynesville paddlers all made it to Metung well within the allotted cut off time and were cheered and encouraged by the huge throng of fellow paddlers and spectators on the shoreline.

The Metung start got underway in to a light headwind and before turning right and heading towards Lakes Entrance. The array of different board styles in the Metung leg meant there were many people attempting their first race, so despite the shorter distance, it still meant that there would be plenty of tired bodies at the end.

With 150 paddlers out on the water, the Water Safety Crew did a magnificent job ensuring everyone was accounted for. Volunteers from the Lakes Entrance SLSC, Sea Spray SLSC and the Coast Guard were all attentative and highly visible. 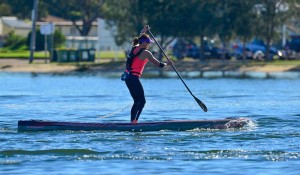 At last the paddlers finally had a glimpse of the footbridge and the finish. The final grind to the end was made tougher with a light headwind an outgoing tide. For many, if not all, that bridge took forever to materialize and the 2km straight seemed to be double that.

All finishers were congratulated and encouraged as they dismounted their boards and wobbled up the beach to the finish. Relief at last! Finishing never felt so good!

A couple of hours later at the presentation, every craft and category were acknowledged, but certainly with the proliferation of Stand Up Paddling in the event, we were a bit of a standout [excuse the pun]. The Lakes Race has become one of the major fixtures on the paddling [and social] calendar for Sup Vic. Apart from the certificates awarded to place getters, Sup Vic were also allowed to award medals to the category winners. 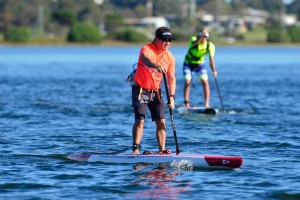 The post sup race festivities happen at the Water Wheel Tavern at Lake Tyers. Most paddlers make use of the Tavern Courtesy bus so they can enjoy a fun night out and take their rehydration seriously! A few beers, great food and lots of hero stories circulated every table as people recounted their awesome day on the water.

The next day saw a social 5km race for those who still had enough energy or people who hadn’t paddled the day before and wanted to give it a crack.

Most paddlers enjoyed a lazy breakfast before heading home.

Just another one of those special weekends away when the SUP community descend upon a town, paddle and enjoy it’s surrounds and vow to be back next year and bring a few more friends. That’s how these events grow in numbers and stature.

A massive thanks to the township of Lakes Entrance, the Lakes Entrance SLSC, Paul King and his race event committee, the volunteer Coast Guard, the Sea Spray SLSC, the Water Wheel Tavern, Sup Vic, KR Sup Centre and the many sponsors of the event.

Without the support from all of these parties, events like this would not be possible.

For those of you who missed it this year, put the date and time aside for 2017. You won’t want to miss it again! 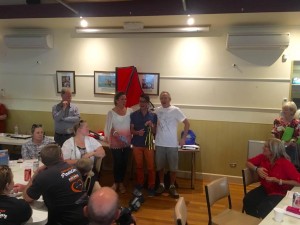 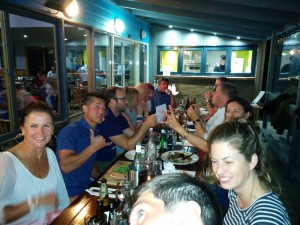