Snowkiting 2016… As always it was a fantastic weekend. There’s been huge debates as to what was the standout moment of the weekend. There seems to be a lot of takers for the “3, 2, 1, bye bye Basil” explosion up top, definitely a good bit of interest for the undeniable lack of Nàgen talent shown by Brett & Rob early on… who would have thought Austrian snow games with a hammer and nail could be so challenging after a few beers? Benni’s kamikaze mid line attack and Brett’s mid kiting camera tackle were on the special side, while Axel’s ridiculous head spins were definite contenders. There was also a lot of late money on Fernando’s snowman bonding session on the final morning, and Sarah’s 5 person Snowkiting train was impressive to watch as well. Normally a bonfire and tornado of smoke being sucked across the kitchen and out the rangehood would totally take the cake but it appears talent was high in the WTF department this year. 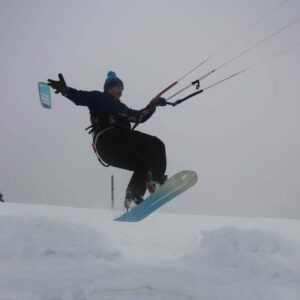 After 4 or 5 hours of early bird Snowkiting on Friday it was time to setup at the lodge and let the shenanigans begin. Couldn’t have asked for a more awesome group to have up there, everyone got involved, helped each other out, and gave plenty of shit where it was due… haha. Good times. After a couple of hours of lodge fun it was off the the General for dinner, beers, tequilla, and live entertainment to laugh and enjoy the night away as we watched the snow falling against the windows outside. There was only one lost soldier that missed the lodge on their way home and was forced to come back and have way more fun for another couple of hours, nice work Alex, totally worth the trip back yeah? 😉 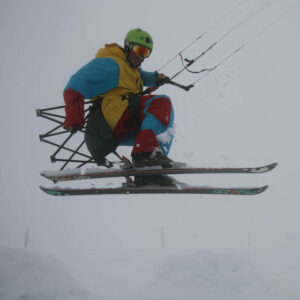 After 15cm fresh snow Friday Night there was a nice split on Saturday. The visibility was too poor for the majority of the day for Snowkiting but the temptation of fresh “powder” and plenty of lifts running got heaps of the crew out there making the most of it. Fernando, Nick and Adam took equal 3rd place in the kicker competition going on at the Snowbird, nice work gents. For those that waited it out to make the most of the Snowkiting up top we were rewarded with just under 2 hours of really nice kiting late in the day, arguably the clearest and best snow we had for the weekend. 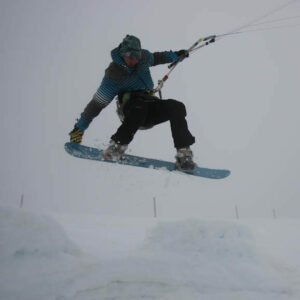 entourage of “singers” and budding muso’s he came through with flying colours. Always adds to the occasion when there’s a bit of talent behind the guitar getting everyone on board, nice work Andy! Fun and games continued well into the night and were backed up with an awesome Burrito meal care of Nick, Sarah and team. Top job guys!

Sunday saw another day of low visibility but nice winds up top. With limited numbers going out at any one time for safety reasons it was fantastic to see everyone’s awesome sharing and helping attitudes up there. Once again, a fantastic trip made all the better due to everyone’s great attitudes and sense of fun.

Can’t wait to do it all again soon!