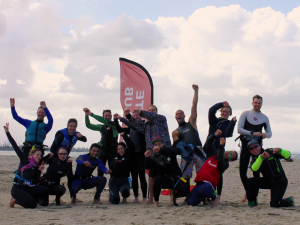 It was a wild and windy day, with winds anywhere from 15kts up to 30kts! We were greeted with a cold southerly front at the KR school in the morning, but the front was fast moving so we quickly loaded up the cars and headed to Altona before the next one hit.

Arriving at Altona it was clear and crisp, with the wind slightly offshore so we all got setup and ready to get out on the water. As soon as the days briefing finished the wind swung cross-onshore and turned into a steady 20kts. Lot of excited club members got out on the water and everyone had a blast. Some of the guys challenged each other to a game of ‘kite’ and this created some epic attempts at new tricks and also some pretty decent crashes! 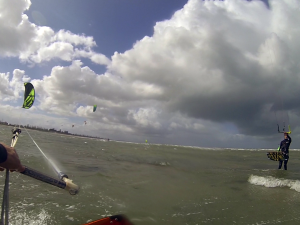 It wasnt too long before the first wind blast from the passing fronts hit, and the winded quickly picked up to gusts around 30kts. It was a good lesson about how to recognize strong frontal winds approaching, and everyone managed to stay safe and do the right thing.

The rest of the day saw fronts rolling through every hour or so, with winds going up and down. This gave everyone a good chance to get tips and tricks from our staff and helpers about things to try once the winds calmed back down.

A great day was had by all that braved the cold, and we saw some people staying out right until the sun went down!

Some special mentions from the day:

David – Awesome stuff out there with those jumps and toeside riding!

Lison – Claiming her best ride day yet, huge grins after lots of good boardstarts and riding both ways.

Andrew – After some hard crashes early in the day perseverence looked to pay off as the frontrolls got better, and we saw some stylish butter slides out there too!

Nicola – Looking alot more confident out there, and getting up on that brand new board.

Paul – Maximising time out on the water, coming in every time a front hit and then getting back out there soon after.

Troy – From riding downwind in the morning to riding upwind both ways by lunchtime, top effort!

Vishal – Had his longest ride on the board yet.

Will – Only been riding for a month, and already getting hooked-in raleys – super fast progression!

Gabby – Handled the strong windy fronts really well, managed to stay safe even when things got a bit hairy. 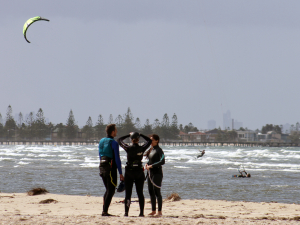 Ben – Great riding out there, good style and technique.

Zeeko – Nailed those backroll transitions, and looking smooth in the air with some nice grabs.

Marcos – Toeside and jumps coming along nicely, time to start working on backrolls!

Thanks to Thomas, Simon, and Nick for assisting the crew, and Brandie for his excellent work on the BBQ keeping everyone well fed and energized!

Click on this link to view the photos from the day, more photos will also be added once we get them off the various GoPro’s that were floating around during the day.