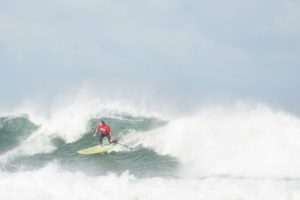 th the 2016/17 race season drawing to a close, it was time for the first winter surf event.

The surf comps have proven to be popular the past 2 years as SV continue to gain experience in the varied facets of running a heat format event.

Largely driven by current SV President, Damien Quinlan [ a keen surfer himself ], Damo did the Surfing Australia Judging Course awhile back and is now passing on his knowledge and experience in this field.

Comp #1 was scheduled for Crunchy Pt / Pt Leo. This reef break has been home to a few SV events already and offers a sometimes hollow right hander as well as a softer waves further in towards the channel.

The forecast 3-4 days out was looking pretty ominous, with good swell, but accompanied by strong westerly winds. 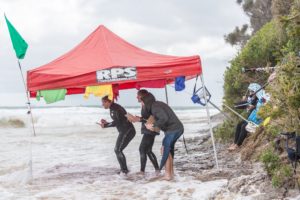 r gods smiled and apart from the odd shower, the day was predominantly fine, with some glorious morning sunshine!

The Judging HQ Tent was set as far up the beach as possible with the huge tide forecast.

Briefing done and it was straight into the mens heats. A moderate offshore breeze held the waves up straight, but also maintained clean conditions. The heat draw ensured there was a mixture of experienced and lesser experienced surfers rubbing shoulders and the camaraderie on the water showed everyone was thoroughly enjoying themselves.

As the rounds progressed the waves steadily became bigger, the rides and wipeouts more exhilarating and the cheers from the people spectating louder.

The judging was constantly rotated and g 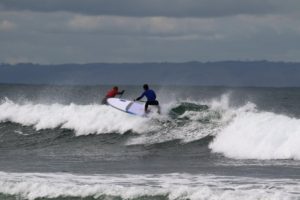 ave most people the opportunity to hit the score sheet and gain an understanding what’s involved to determine the placings.

People used numerous different shape and size boards, with the noticeable favourite being the 10 footer. These new, performance shapes resemble a stock Mal/longboard and are only marginally bigger than the regular boards.

The tide surge forced people spectating to higher ground, whilst those who were judging ended up in thigh deep water, still beneath the trusty old RPS marquee, [Sup Vic is in the process of purchasing a new tent].

The best waves came through the semi-finals, providing some great high scoring waves.

Once the finals had been run, everyone combined to help evacuate the area and pack up. The presentation was held in the top carpark, with everyone happy to be finally warm and dry after a long day in the elements.

Well done to everybody that came along.

Special mentions to Damien Quinlan for his organisational skills, compiling and tallying the draw sheet and his judging tuition. Allan McKellar for his on water coaching/from the sidelines during the women’s heats and providing some excellent tips. And Chris Clarke for noticing Meleah Zanos breaking her leggie during the final and paddling a board out to her so she could resume surfing, whilst he then went and retrieved her runaway board.