The riding was great, the parties were awesome and most importantly Ewan’s Clinics were super informative and got everyone stoked to step it up!

It’s very rare to have the opportunity to learn from the top kiteboarder in Australia, an even more so to be able to spend a full weekend soaking up all that knowledge and having an awesome adventure with like minded people at the same time.

Ewan Jaspan’s Clinic Weekend was a great opportunity to do just that. Ewan’s knowledge combined with his passion and energy for helping others learn new skills was outstanding and the feedback from everyone involved was incredibly positive.

It was awesome to see everyone having a red hot go on (& off) the water. For the early leavers on Friday they were treated to fun sessions both in the waves early as well as a dead flat inlet session later in the afternoon. 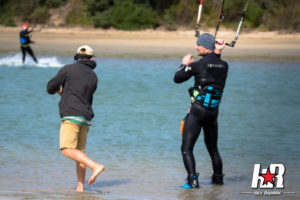 The house was fantastic and made even better by everyone’s awesome attitudes and super friendly and outgoing natures. Amanda’s cooking crew were outstanding, while Looping Louie was a clear standout in the games department with Kubb, table tennis and pool not far behind either.

Saturday was filled with Ewan’s Clinics, a SUP Wave Clinic, a lot of laughs as the Sandy Point washing machine made short work of us in the surf and then some foiling and winch action at the inlet as we waited for more wind.

Then it happened… the forecast was touch and go coming into Sunday, however with some early wakers starting to chat excitedly around the house and plenty of wind pumping through the trees we were all up nice and early and treated to bacon and egg wraps to kick the morning off.

As soon as we drove out onto the beach we were STOKED! A solid 20-25 knots and a perfect direction to start the day. Lars had already been out for half an hour or so and the rest of us were very close behind.

Ewan made great use of the KR Radio Helmets as they swapped between people for hours on end and had everyone absolutely frothing to step their level up and learn from the best.

A huge thankyou to everyone involved that made it such a fun weekend, can’t wait to do it all again soon!