Epic forecasts with great wind and tides expected looked a little shaky early on as the Westerly winds were a little too prominent. Soon enough however it straightened up and with just enough time for everyone to maximise their clinic time at the start of the day it was time to put it all into practice.

5 or 6 hours of epic winds and nice high tides was just what the doctor ordered for Altona to be able to showcase itself to the group.

Awesome to see everyone making the most of a great day and giving it a red hot go out there on the water. 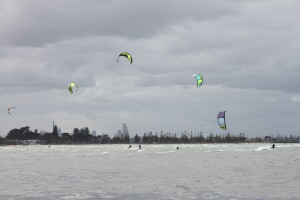 Some of the standouts were…

Cheryl, Atif and Ray unstoppable and the last on the water.

Sebastian nailed the dry transitions.
Kevin improved upwind abilities cruising and having far better control of the board.
Mark was working hard on his 9m, having a few good runs and just a little under done.

Charlotte was cruising along, best kiting we’ve seen madame 😉
Sarah with only 1 hour sleep the night before got into the water at 10am, improving confidence and nailing some great runs.
Nicholas logged plenty of k’s and got to know the local Altona waves very well.
Bebhinn had a run with the local seaweed before regaining the upper hand and hitting the water for  while later on.
Ryland totally got lost amongst his kilometers of kiting and decided to come back after 2 hours on the move.
Henry was loving his new Monarch… first guy in the water on his 18m Juice and kept using it until 22 knots made it a little hard to handle.
Phil was making the most of great conditions and got a tonne of watertime up.
Shane was smashing his jumps.
Lison was looking great and starting to nail the upwind riding too.
Emily and Jane made a fashionably late appearance before smashing out a non-stop 2 hours of kiting.
Adam nailed some great unhooked tricks on his birthday!
Liam stole Adam’s Dice and was out there absolutely loving it.
Basil was rocking all sorts of great carve turns and having a blast in the Altona waves on the Nugget!
Big thanks to Cesar, Nick, Thomas and Brandie for their help on the water. Adriana was a superstar behind the BBQ and camera and all in all it was a great day on the water.
If you’re keen to improve your quiver check out the awesome ‘Bring Chocolate’ KITE & SUP SALE on at the moment. And for more awesome KR CLUB Events CLICK HERE!