What’s that saying again? “What happens on tour stays on tour…” Yeah, I don’t think so. There was way too much epic action, great thrills and spills, exciting and fun times and new experiences shared by all that would be plain rude not to share a little bit, surely…
Where do you start though?

Is it the crystal clear, butter flat, waist deep Aitutaki waters that were the standout? Was it the massive progressions and huge range of new tricks that everyone took from the daily clinics and personal help throughout the tours? What about the whale swims tour 1 enjoyed, the snorkeling with GT’s or the spear fishing on the untouched outer reef others got involved in? One things for sure… the camaraderie shared by everyone on KR’s tour, the fun we all had and the friends that we’ve made for life through this Aitutaki Winter Escape alone have made it a very special and exciting time for everyone involved.

There was action from the get go. Happy Hour Cocktails were the perfect way to kick things off and make sure everyone was chatting it up to meet the rest of the crew on the first night of each tour. After dusting ourselves off the next mornings it was straight across the crystal clear lagoon to setup our gear at Honeymoon Island and get our kiting on! 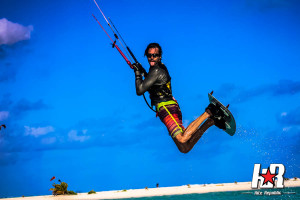 out there Darkslides, Lison/Racim/Russ/Peter/Karen/Tina/Steve putting it all together and adding truck loads of confidence to their riding, Jay/Ryland/Tim/Andy/Rohan/Phil/Ari/Beck/Sam smashing backrolls, toesdie and various other tricks, or Troy/Jeremy (the Jiz)/Pierre/Adrian making awesome progressions on their jumping and edge strength. Kiwi Chris, Sofia & Vicki were clearly out there to prove a point with their raley antics and Rachelle/Julie were tweaking out their backrolls with grabs while Jenna/Amanda/Adriana made a perfect start to their kiting careers. It was an awesome thing to see everyone in action and pushing themselves out there some days, while exploring the lagoon on others. Always a pleasure to see Nick smashing out big S-Bends to Blind while the midgets looked like they were all having a blast chasing crabs and birds around the island and being spoilt with hugs from the other kids and adults alike. 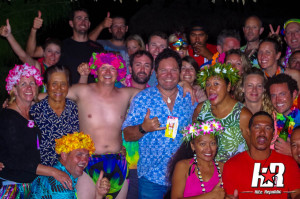 The Party & Awards Night was a hoot as always with some epic “Island Style” costumes on full display each Tour. 3 (Aitutaki Michelin) Hat Chef Nick was a good friend to have. Whether catching sand crabs, spearing parrot fish, hand line off canoe catching Barramundi or preparing some of the biggest feasts Aitutaki has seen for the parties he was in fine form and deserves plenty of accolades. 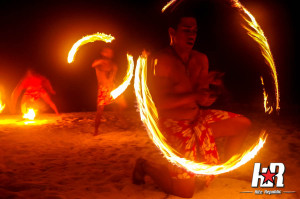 The Fire Twirling was a sight to behold, while bonfires on the beach and traditional cooked in the ground Umu feasts were an unbelievable treat. Giant Mud Crabs cooked in a tin bucket on the fire were a rare delicacy, while trying to decide whether it was Lison & Racim or Phil & Sarah that took the traditional dancing honors was as tough as it gets after 5 or 6 Coco Loco’s. Either way, we very much appreciated the Wet & Wild Crew of Quentin, Melo, Mini Q, Shakyl, Alana & Stephen sharing their home and their passion with us, which again wouldn’t have been the same without Jack, Ina & JJ out there either! 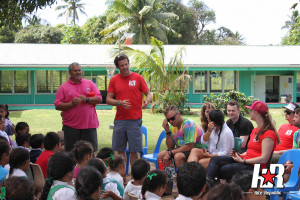 The visit to Aitutaki’s Aurora Primary School was an absolute treat, while Troy, guitar in hand led the way through Waltzing Matilda which was a lot of fun and showed our lack of talent (except Troy of course) when compared with the primary school kids who clearly showed us up.

We were treated with a rare but interesting eel attack while snorkeling outside the reef, while there was no doubting that ‘Necklace’ was by far the most successful hermit crab ever to grace the crab racing field. It’s under debate whether it was the transparent board shorts that had her running (or is it scurrying?) for her life each time the coconut was lifted. Either way, she was a rare talent, and held it together beautifully against ‘Mother of Dragons’… who apparently is joining the Russian Olympic weightlifting team in Rio. 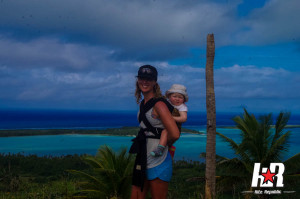 Seeing Aitutaki from the very top lookout was another rare treat, where on the other end of the spectrum seeing sleeping bubs passed out in life jackets still all over One Foot Island was a moment we’ll all laugh at and remember also. Some rugby with the local crew, more Coco Loco action and a day spent laughing, swimming and relaxing was just what the doctor ordered.

Without Super Jiz (Jeremy) and Sofia to save the day we 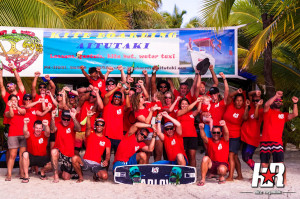 all have our doubts as to whether Pete’s sinking kayak would have made it home, while we were equally shocked when T-bag’s (formerly known as Tina) gear bag arrived on the island a mere week late.

The near escape back to China of Phil’s drone is stuff of legend, while the teamwork of Phil and Jay nearly saw a full backflip from a scootered up Cesar.

We couldn’t believe the pool table at the Fishing Club only had a mere 10 or so degree lean to the far pocket this year, while the local crew had a good few laughs at our expense when we forgot to allow for the right hand turn the ball always took. 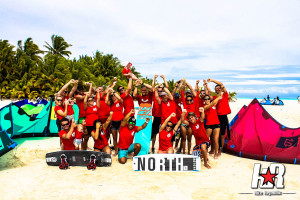 Along with some funky dancing and killer outfits that may ruin our eyes forever more it was Ryland unleashing at the Boatshed’s Karaoke that we were most impressed with.

It was another fantastic and amazingly social time in Aitutaki. We saw some huge progressions and were amazingly pleased yet again with the positive feedback from the trip.

Hope you can join us in paradise next year! 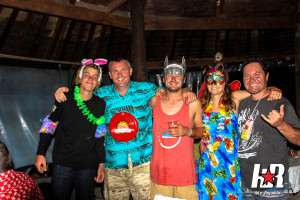 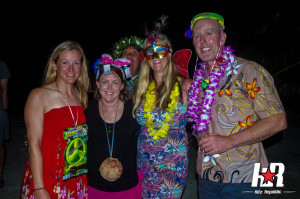 Some of the awesome improvements and big leaps forwards this year included: 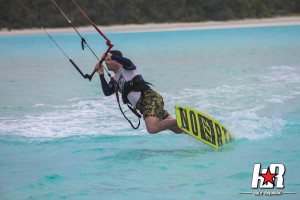 Lison – Not only upwind, but toeside action and a good start on jumping!

Racim – Great work mate, some awesome rides and so close to upwind now. 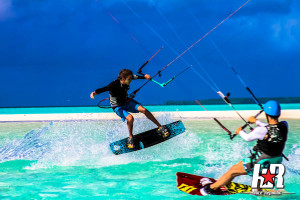 Jeremy – Upwinding like a machine now, added jumps, great effort on the backrolls too. 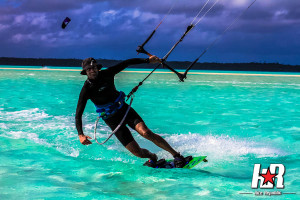 Jacquie – Great job on getting going Jacquie. Nice to make a start and everyone was raving about your acupuncture. Thankyou!

Ryland – The karaoke master. Also mixing it up with some great backrolls and skim board riding. Standout was definitely load and pop combo’d with jump technique. 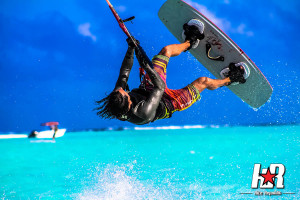 Tim – Backrolls, jump transitions and again your edge technique means you can now learn any jump from the right start. Top work!

Jenna / Adriana / Amanda – Fantastic to get you guys started and give you a taste of kiting in such a beautiful place. Time to get it happening back home now 😉 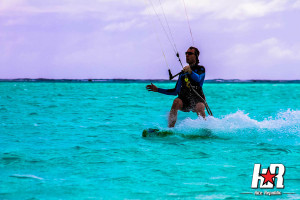 Tbag (formerly known as Tina) – Fantastic effort out there and was great to see you looking so comfortable. Also fantastic work in a tough situation, can’t wait to get you back out there soon!

Karen / Kelly – It’s official… you guys are kiters. Can’t wait to get you out there on some Ride Days soon.

Nathan – Darkslides looking great (not as great as the orange glove though), and some stuper stylish grabs and fronts. Nice! 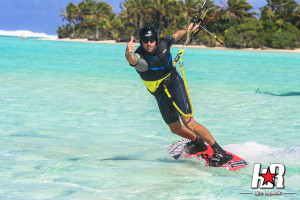 Vicki – The battle is definitely on. Love that you guys are pushing each other and so good to see you nailing raleys, backroll transitions and creating new stuff for yourself!

Rachelle – Great to see you tweaking out those grabbed backrolls, nice fronts and good to see the raleys taking shape. Love it! 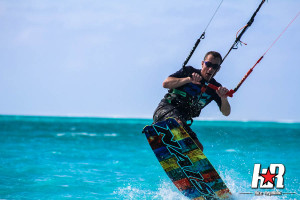 Luke – Great work on the raley to blinds and hooked in front to blinds mate. So landed a couple of the R2B’s, now to ride it away! Can’t believe you were looping out of the front to blinds, good to watch!

Julie – Darkslides were looking great and awesome to see you sort out the load and pops, backrolls and grabbed backrolls without sending the kite. Ready for raleys now!

Corey – Smashing out some huge freeride moves and adding unhooked raleys to the mix. Nice work! 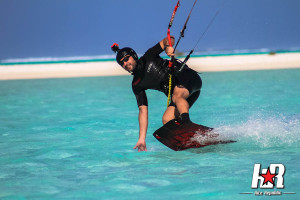 Sam – Totally different load and pop after the first couple of days. Stoked to see you nailing backrolls, some huge jumps and enjoying a whole lot of exploring out there.

Steve – Awesome to see the step up mate. Looking confident and some great edge control out there!

Ari – Why wait… Backrolls before boosts I say!!! Haha. Great to see the giant leaps you were making out there mate, a fun season ahead! 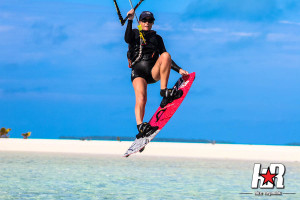 Thor – Raleys, Darkslides and some serious style. Not to mention sharing the love and getting the ladies up and riding. Champion!

Cesar/Nick/Chris/Sarah – Could not be more stoked being able to share one of our favorite places on the planet with such an awesome group of people. Pushing ourselves out there was fun, but watching and helping you guys stepping it up was very special, thanks for the great times, already counting down to Aitutaki 2017!

Aitutaki Kiteboarding 2016 – A tour to remember