Where do you start? Aitutaki 2015… Paradise with kites 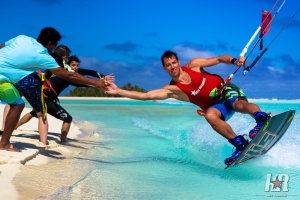 From all reports this was the most epic kiteboarding tour and progression period that any of the tour goers had ever believed possible, and yet at the same time we had heaps of fun swimming with whales, snorkeling with Giant Trevally, checking out ridiculously big Giant Clams, hanging out and learning how to build Umu’s, weaving the food baskets, having our ladies attempted to be married off to Uncle Johnny’s son while being hustled at the pool table that has a strategic 10 degree lean propped up with chocs to the far right corner (locals advantage of course), and for the lucky, some epic local outrigger canoe style f 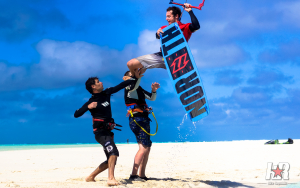 ishing that provided breakfast for a few. Combine all this with some great spear fishing (also providing lunch), fun downwinders from One Foot Island, 50 or so amazing people, 16.5 solid wind days out of 20, some epic parties, cocktail happy hours, an awesome welcome and presentation from the Aitutaki Primary School as we handed over all the kids kites, pencils, games etc. that we took over for them… oh and it’s worth mentioning the planets best flatwater kiting lagoon and it’s pretty hard to imagine a better trip. 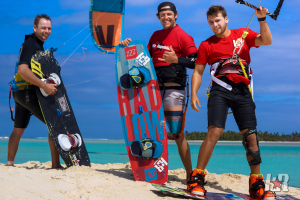 We were super lucky to have Leo and his crew from WOO Sports work hard to get some WOO’s over there for us to get some fun little competitions and bragging rights sessions in. Awesome fun to be able to track jump height, hangtime and g-force on landing. Click here to check out the WOO!

We were taken care of brilliantly by the crew from Wet and Wild. Quinton & Melo coordinated everything beautifully, Jack, JJ & Danni were awesome and kept it all running well, Mini Q, Shakyl, Alana & Stephen were fantastic to have around and we were stoked to see Mini Q landing his first backrolls a few days before we left, keep up the great work guys!

The daily combo of both theory and on-water clinics from Ewan Jaspan and Chris, backed up by heaps of riding time and follow up by Chris, Ewan, Simon, Marty, JP, and Deano led to crazy amounts of progression, and even more crazy amounts of new ideas that people were putting into practice and getting their heads around. Well over 100 new tricks and skills were learnt during the 20 days and a heck of a lot more things again that are now on the cusp of being nailed. Outstanding work team! 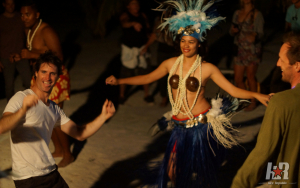 The end of tour Pool Parties were sensational with many stories that will no doubt surface in time… these wouldn’t have been possible without Bart leading the charge and catering for Tour 1, and Amanda & Amy doing a great job for Tour 2. There were a lot of outstanding outfits across both parties but Tour 1 had to go to the Island Girls (Marty, Ewan, Simo & Chris) on pure shock value, while Tour 2 although a close one would have to be Gabby for backing it up with the full Pocahontas Dance… outstanding!

The Pool Parties also doubled as the Awards Night… and with all the new tricks, skills, and wipeouts along the way to make that happen, they were always going to be entertaining… 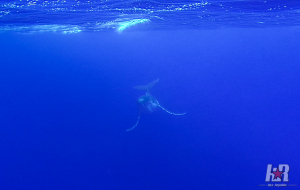 I think you’ll all agree that JP did a fantastic job as photographer and video guy, can’t wait to see everything once it’s put together and finalized, heaps of epic shots and some great backup by Andy (with the Amanda sequence) and Marty with a good chunk of filming going on at the point. 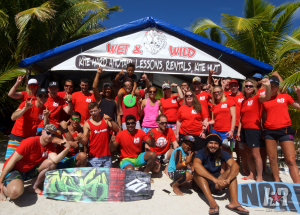 Megan – smashing out frontrolls and some great unhooked riding going on!

Anne – technique makeover and height boost on the jumps and some styling toeside action!

Dave A – styling those jumps with some great grabs and added control!

Emma – what can we say… from never touching a kite to up and riding, boom!

Adam – BACKROLLS!!! And some great technique updates and timing on the jumps.

Marcus – almost took out the stack of the trip, this only happens when you’re going mega hard. Backroll transitions, unhooking, and generally styling it up!

Rachelle – if there was a ‘Coral Crusader’ award for trip 1 it was definitely you… awesome comeback after an unlucky coral incident, great to see you out there having a blast bad foot and all! 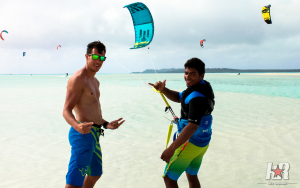 Jack – you don’t become King of Aitutaki for no reason, haha, from backrolls every now and then to inverted backs, fronts, butterslides, darkslides, unhooked, raleys, backroll transitions and other general smartassedness… great job mate!

Tom – Looking so much stronger in general. The load and pop is completely remade and looking awesome, boots are good, butterslides looking great too!

Amy N – Killing it out there. From about 2 hours of kiting to up and cruising, riding both ways and holding ground, great effort!

Bart – WOW, definitely no holding back. Didn’t matter if it was darkslides, raleys, boost sessions or other, there was no stopping Bart, massive effort!

Dave M – Taker of the ‘Balls Out’ Award for good reason. Kited the most (maybe with exception of Gappy), went the hardest, refined a heap of tricks and added a way stronger load and pop base that lead to S-Bends, huge raleys and heaps more. Great to watch!

Tam – The Queen of Tour 1… 100% energy at all times on the water. Beach starts, backroll transitions, unhooked raleys, unhooked backrolls, frontrolls and some successful darkslides to name a few. Huge!

Deano – going hard out there… nailing butterslides, darkslides, getting way more pop and inverting his backrolls and in general just giving it a red hot go, fun to watch!

JP – the man behind the camera. Has also been snapped nailing his first frontroll (which was followed by many more) and mixing up heaps of spin transitions amongst other stuff.

Marty – thought he had landed his first raley to blind… only to realize he’d skipped straight over that and smashed out a raley to wrapped. Great effort!

Simon – the explorer… when he wasn’t helping get people going or pushing them, he was either riding in the dead flat at the point or out exploring the reef, what a spot for it!

Ewan – awesome to see Ewan back on the water and able to properly begin pushing his body again. Was killing it with some nice KGB 5’s.

Chris – couldn’t have been more stoked with everyone’s progressions and willingness to have a red hot go. Loved it! 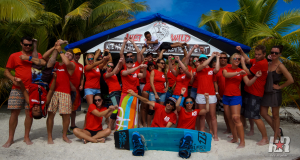 Nicola – the ‘Queen of Aitutaki’ for good reason, riding confidently, upwind both ways, toeside, load and pops, somebody stop this girl!

Sarah – load and pops looking awesome and some great boosting going on too. Definitely in the running for the ‘balls out’ award after some sensational ‘Top Gun’ style flat spins on the early backroll attempts. Love you work!

Jane – logging the most hours of the trip for sure. Great early boosting efforts followed by some awesome toeside progression that lead to downloop carve turns and awesome control out there. Great work!

Anna – A great start to unhooking, nailed the backrolls and logged some serious hours checking out the lagoon!

Reem – Sensational effort! Up and riding both ways, getting upwind and some great dry turns, well done! 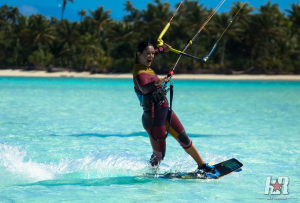 Emily – or ‘Queen Emily’ should we say… cracked the upwind bit, pops, jumps, dry turns and made it look good. Definitely the most ladylike crashes going on as well!

Pete – Top effort out there. Great runs in both directions and some sensational bails along the way, well done!

Andy – Great to see the new additions to the quiver… backroll kiteloop hand drags, great efforts on the surface passes, darkslides for days and heaps more invert on the rolls. Fun to watch!

Amanda – Awesome invert on the backrolls, pops looking a bunch better, a great start on the unhooked tricks and I swear I saw some frontrolls. Not to mention your toeside looked a bunch better out there, top stuff Manz, a definite ‘Balls Out’ winner!

Amy – Was awesome to see you challenging yourself each session Amy. Load and pop as well as jumps looking heaps smoother and fantastic to see the backrolls being nailed consistently. Well done!

John – ‘King John’ to you! Great to see you breaking it down and nailing trick by trick as you smashed it out on the water. Backs, fronts, unhooked, transitions and more, it was very good to watch!

Vikki – totally on a mission out there. From tacks on the surfboard to smashing her load and pops, buttersliding like a champion and backrolls with a sweet amount of invert. Very nice to watch!

Tam – The only thing that was going to stop her after that massive first week was a sore knee… unfortunately she got one. A few days off the water and helping others progress and she was back out there having a red hot go, top stuff Tam! 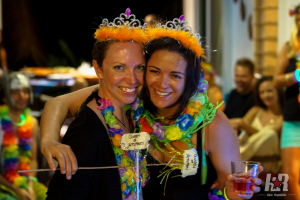 Marty – Consisten raley’s to blind, some back to blinds that were oh so close, and a hell of a lot of super fun sessioning out there with the crew. Good times!

JP – Killed it with the photos yet again, on the water the sessions were looking more and more fun every time. If he wasn’t exploring the reef out the back he was tweaking the front rolls and having a great time on the water!

Dean, Simon, Ewan & Chris – Were absolutely stoked to see the progressions everyone made, the efforts everyone put in while on the water. It was heaps of fun to get out there with everyone and so good to see the time spent mowing the grass was very limited.

Thankyou to everyone that was involved in this years KR Aitutaki Winter Escape, it has been heralded by all that were involved as by far the best kiteboarding tour they’ve been a part of. We hope you can join us in 2016, bookings are open and dates are 99% set (subject to AirRaro releasing exact flights 320 days out… +/- 1 day max).

Click here to BOOK NOW or checkout the 2016 Tour Info. Remember 2015 booked out 9 months in advance, GET IN QUICK!