For the past 8 years, Sup Vic have had an annual surf weekend during Autumn.

What originally started out as a surf comp/expression session, has gradually now morphed into a surfing social expression session. No heats, no organized times, just the pure freedom of being able to surf when and where one wishes to.

The inaugural event was held at Venus Bay and since then, every year the Sup Vic mob has descended on Inverloch for a weekend of waves and partying. During it’s history, there’s been a huge range of activities from retailer demos, Bop and Nisco racing, Giant XXL Sup tours, windsurf and kitesurf escapades, BBQ’s, dancing…..the list is endless. 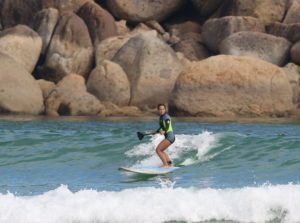 The SV committee hatched a plan last year to shift the annual weekend to Wilson’s Prom for the most casual of surf trips. If you’ve not been to the Prom before, then picture a majestic, granite strewn peak, rising straight out of the deep, blue ocean, fringed by the cleanest beaches with the clearest water, then you’ll get the picture.

The weekend’s format was simple. Arrive, set up camp, surf, eat, relax and surf some more.

The early Friday arrivals bagged the front row campsites and cannily coordinated directing fellow SV members to the remaining prime sites. First in, Best Dressed is the order at the Prom. 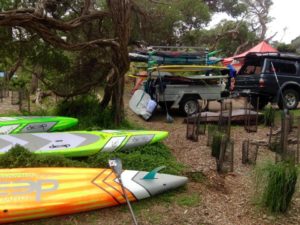 Friday afternoon saw the crew head to the southern end of Norman Bay where there were small, clean waves and protection from the blustery, offshore North East’er.

After 2 hrs and stacks of waves, it was time to paddle/surf back to the campsite, enjoy a well earned beverage and greet the crew as they trickled in from the post work trek.

The wonderful thing about camping at the Prom is the absence of powered sites, which combined with the stunning natural beauty, creates a feeling of serenity and solitude.

After a windy night and rampant, hungry wombats scrounging any food scraps [or any full rubbish bags left at ground level], the wind eventually abated around 2.30am. 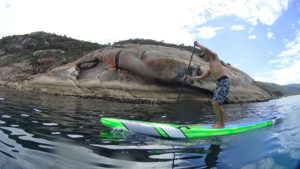 Everyone awoke to the sight of a perfect, straight, glassy swell. The sup crew filtered down to start a long day on the water. At any point during the morning, there were 20 – 25 paddlers sharing the seemingly endless sets, hooting each other and soaking up the grandeur of the landscape.

With over 50 Sup Vic members and their families enjoying the beach, a few took the opportunity to explore the park and scale Mt Oberon. The sweeping 360 degree views from the summit are stupendously breathtaking. Any wonder people travel from around the globe to visit. 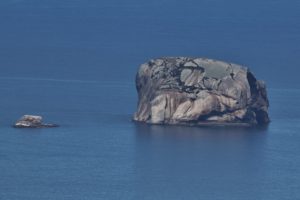 Others hit the surf, some paddled the entire breadth of Norman Bay, whilst another group paddled around to the neighbouring Picnic Bay and had a private wave-fest.

A happy but shattered crew spent the Saturday night replenishing in their favourite ways, before collapsing ahead of Sunday.

Sunday dawned overcast, slightly onshore with a big jump in the swell!

With the wind forecast to go offshore, there was no rush. 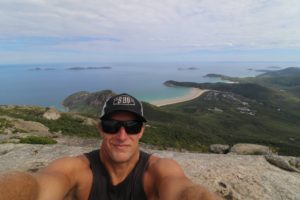 Around 9am the conditions cleaned up, the sun started to break through and the crew were at it again for another 2-3 hrs of waves. Solid sets to the south of the bay saw some great rides, whilst closer to the campground saw smaller waves suiting the less experienced.

As the tide eventually went out, the waves also started to dwindle. Time to break camp and wander back to Melbourne.

The weekend was a huge success and certainly a highlight for everyone that made the effort to come along.

Thanks to KR Sup and 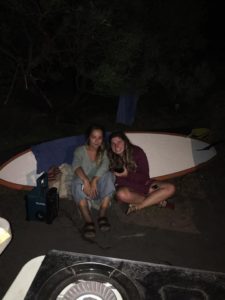 Chris Clarke from Deep for providing an amazing array of demo boards for people to try in equally amazing conditions.

The 10 ft category is gathering some real momentum, as it allows more people to ride more waves. The modern 10 ft sup is an amazingly versatile surf sup.

Great to see so many families with parents encouraging their daughters to wield the paddle and sup surf. I’m sure we’ll see more at coming events.

The weather was as perfect as you’d expect during Autumn, crowds were minimal and we were blessed with waves.