The day following what might’ve been the largest swell to hit Victoria for 2017 saw Sup Vic hold their 2nd of 4 surf comps for winter. 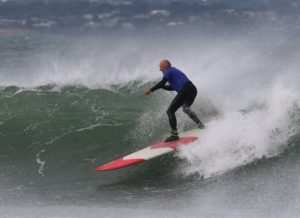 Once again, the crew hit Crunchy Pt at Point Leo. The swell had tempered overnight, straightened up and still continued to roll into Westernport Bay.

The briefing saw Damien Quinlan run through the surfing criteria by which the surfers would be judged upon.

Being the inaugural Victorian 10 foot comp, the surfing all had to be about style, flowing turns, cross-stepping, toes over the nose and any other moves that would catch the eyes of the judges.

The early heats hit the water and the action was a plenty. 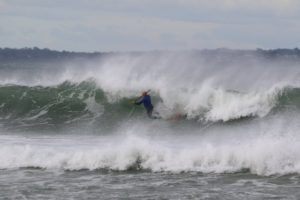 As the tide started to fill in the waves improved, with the sets around the 3 – 4 ft mark. Unfortunately during a few heats the stiff northerly, offshore wind became quite strong and held the waves up feathering for ages.

The benefit being the spectators got to witness the best wipeouts for the day. And there were plenty!

Everyone got to surf through at least 2 heats and/or a semi-final. 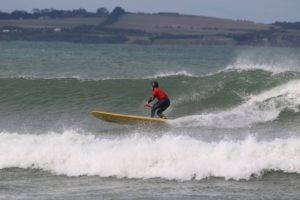 By the time the semi’s hit the water, the wind had backed right off presenting beautiful, clean conditions and some fantastic creative surfing.

The results from the semi’s were kept confidential until their completion, then they were unveiled to announce the 4 surfers that would contest a 25 min final. There was set after set during the final, with everyone hooking into plenty of waves.

Smiles, waves, footwork, it was all there! 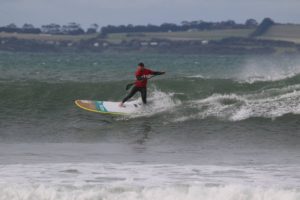 The 10 foot category is relatively new and not everyone has one in their quiver. Fortunately a stack of tasty 10 boards were supplied from Deep, Naish and Fanatic, courtesy of Chris Clarke and KR Sup for everyone the use. 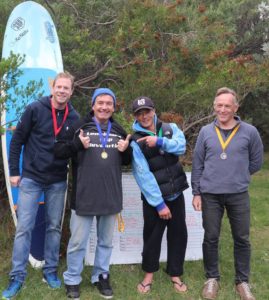 Great to see so much enthusiasm and support for these regular surf comps.

Thanks to Chris Clarke for manning the camera all day and taking some cracking photos. Unfortunately he injured himself the day before, wiping out on a heavy wave. We wish him all the best for a speedy recovery before the next comp.